“You’re a doormat,” says Kristin, the hypnotherapist. I perch, pathetic, on the edge of her soft, green sofa. The sofa sags from the weight of the woe I and countless hypnotherapees before me have brought to Kristin’s office for healing.

“You’re afraid to say the word no,” she continues. I sigh. She’s so right. You’re too nice, the boyfriends pronounce at breakup. You have the Disease to Please, a segment of Oprah diagnoses. So, says Kristin before I slump further and forever into the sofa cushions in an effort to disappear my meek, unassertive self into a mote of insignificance. “I have a great idea for you.” Sigh. Oh, woe. Whatever. “What would you think about a class in self-defense?”

Why I let Kristin convince me to join six other diseased-to-please women in a course the community Parks and Rec department titles Self Defense for Women, a class it presents as “the means to increase your personal safety at home, work, school and on the street,” I don’t know. Yet days later here I am, introducing my no-phobic self to Tanya, our self-defense instructor. Tattoos color nearly every pore of her twiggy arms. Her will o’ wisp legs and hips – what hips? – wear teensy, tight jeans. Five-foot-zero, Tanya tips the scale at maybe 93. She is so slight, in fact, it must be the 12 piercings of each ear, holes weighted with assorted, dangling…what are they, bear traps? tiger snares?…that keep her from being carried off on the breeze. If fierceness has a sister it ain’t she. But still. The tiger snares do seem ominous. 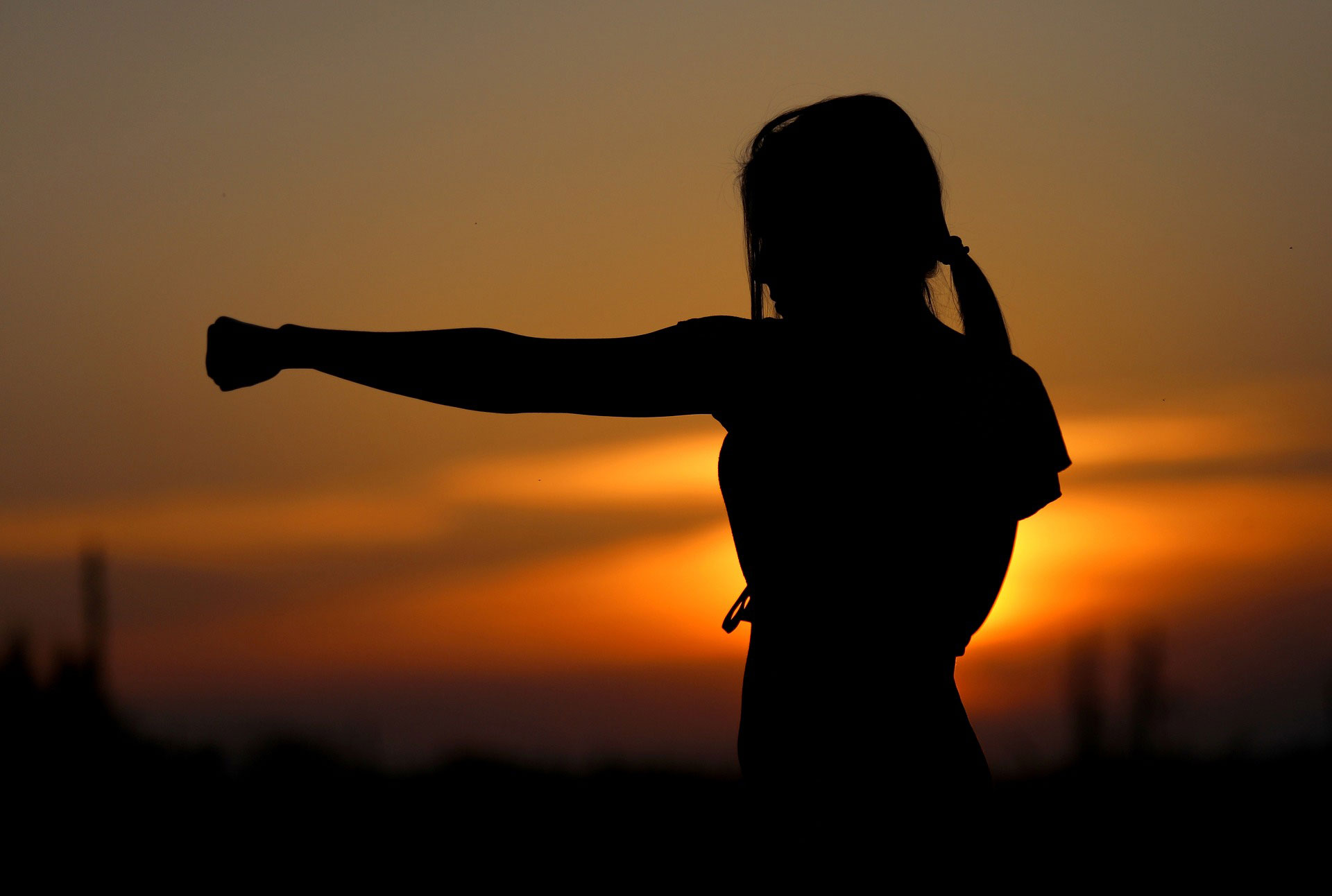 “Hi,” she says, friendly enough. “So you want to learn to use your strengths against a perpetrator’s weaknesses?” I have no strengths, I think. I’m a doormat. My friends in personal safety training don’t look to have many strengths either. “Vanessa” sits wide-eyed on the group’s fringe, shy. “Renee” focuses on her stiletto-heeled shoe when we are introduced. The lips of “Angelica” do move when asked for her name, but the silence that comes out causes Tanya to say it twice: “I’m sorry, what was that? Please speak up.” The others look soft, pleasant, polite. Nice girls. That’s what we are. I nervously twist my necklace of pearls and consider Tanya’s tattoos. Kung-fu fighters are they? Fire-hurling dragons?

She says: “Do you want to end annoying behavior, harassment or physical threat?” To be a doormat first you have to lie down. In my head I hear Kristin’s voice. It would be good in life if I could just stay standing, good not to let the world see the Welcome of me, coming and going. “Well,” Tanya pronounces. “This is it, the class that addresses assertiveness, body language, the power of voice and,” she does a chop-chop-flip thing with her hands, “how to do a lot of damage.”

Vanessa looks stricken. Renee raises her hand. “Will we learn how to go for the, you know, privates” she asks. 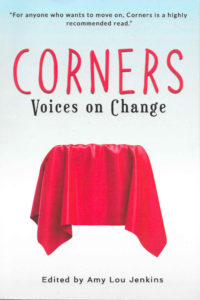 Who knew that what we get to will be lessons in self-defense techniques like a “snap kick” that will shatter a kneecap. A “nose strike” that in a split-second can leave one broken and bloody. This is serious stuff, Tanya tells us; maneuvers proven effective at fighting off, God forbid, a sexual or other assault, as well as attitudes that tell friends, family, society, Just you try. However empowering this self-defense arsenal may be, however, here we people-pleasers are, paired up to practice an “eye-strike” that can send an attacker’s eyeballs to the netherworld of agony. We are to press our thumbs into our partner’s eyebrows to approximate the technique. Yet despite Tanya’s instruction of “Harder! Harder!” the maneuver isn’t exactly going over.

“Oops, I’m sorry,” apologizes Angelica, as her thumbs poke me in the cheeks by mistake.

“Oh! Excuse me!” says Vanessa, who accidentally de-arranges Renee’s hair in her eye-strike attempt; it’s a fallen-over pouf she pokes to arrange back.

Tanya has seen our type. I imagine her kung-fu fighters are wizened to the fact nice girls like us need a chop-thing-plus to break through a lifetime of habit. All our years of oh, no, after you! All our decades of please, never mind me! Here they are, baked into cream puffs of women like me – I who end nearly every sentence with a question? You know, of self-doubt?

She tightens the screws of our training.

“Okay. Now I want you to add the yell,” she says. I cringe. Nice girls don’t like to yell. “What sort of yell might you use in a potential situation? Anyone?”

“Um,” says Angelica, “stop it?” Her voice is a flutter. If it were a color, it would be pretty peach.

“No,” says Tanya, flatly. “That’s victim-talk. Where there’s victim-talk there’s victim-thought. Remember,” she flexes her bicep and its kung-fun fighter grimaces with menace, “YOU’VE GOT THE POWER.” Tanya may be tiny but her voice grows big, bold, bad.

Oh, right. I’ve got the power. You let people walk all over you. There’s Kristin’s voice again. I so do not have any power whatsoever. But Tanya insists that while in “ground defense position” – we’re on our backs with hands crossed over our hearts and legs bent and prepped to kick – we run through the maneuver guaranteed to throw off an attacker even if our arms are pinned. In there is a pelvic thrust of a sort that causes Vanessa to take exception.

You can, Tanya says. The tiger snares clank a threat. “You have no idea how strong you are and powerful you become when your yell is added. Now, let me hear it. NO!” she booms. I swear, the classroom windows rattle. We diseased-to-pleasers in unison flinch at the force of it. From that bitty thing! I stand in awe.

“No!” ventures Renee. It’s the no of a mom denying her child permission to watch TV. Firm, but trimmed in sugar and spice and everything nice.

Yikes! I don’t know how the windows hold it together.

“No! No! No!” Like the others I try, “No!” Over and over and over. I’m on about my 12th when suddenly, something snaps: “NO!!!!” I roar. This is a no unlike any no I have ever known. It is primal. Raw. Dangerous. It comes from I know not where. The others stare at me, stunned.

“Nice!” says Tanya. “Nice.” I sense her kung-fu fighters’ approval. Now, she says, let’s put it together. Try “Stop it!” with a nose-strike. Or “Leave me alone!” with a snap-kick. Or how about “Go away!” with a good instep-stomp. Whatever you do, I want to hear it!”

So all we doormats do. STOP IT! GO AWAY! NO! As we roar and as we boom, the nose-strikes fly, the kicks and thrusts and means of damage happen. I get the hang. I feel almost dragon-esque, hurling fire. “ENOUGH!” I flame and give the blue training pad a vicious kick to the kneecap.

“About the groin.” Tanya’s voice interrupts. She is moving on. We stop, breathless, for what surely is the class denouement.

No one wants to be the first to laugh. But there goes Renee – ha! – so the rest of us erupt; we snicker and hoot and slap and grab; we twist and pull, at least pretend, until by the gift of a technique that could literally save us in far more serious circumstances, we come to rescue ourselves. Tanya cheerleads Nice! Nice! Nice! as our snickers turn to booms and our hoots to yells and we fight off years of fears by mastering this and the other moves that power-up something within us that I, for one, had no clue existed. After the longest time we wind down and finally, amid huffs and puffs and buckets of sweat, stop.

I am completely spent yet, strangely, satisfied, my heart thumping with the exercise. Vanessa, flushed, beams. Angelina speaks: “Whoohoo!” If her voice could swagger it would. Goodness me, it’s Angelina unleashed! “That was fun!”

“See?” says Tanya, “It is fun to feel self-assured and unafraid, to know you absolutely can handle a situation in ways you never thought.” What’s more, she adds, mastering the physical moves of self-protection imprints strength into muscle memory. Feel power in the body and a woman can better own her other power. The wimpy one. The welcome mat that wants to duck beneath cushions in shyness and shame.

So, says Kristin, my first appointment back. I perch, perky, on the edge of her soft, green sofa. “How’d it go?”

“Just great!” I say, completely woe-free. And like the woman who wears fine French lingerie beneath her office outfit feels sexy with her secret, I feel fierce with mine.

“It’s going to be a lot easier to say no from now on, isn’t it?” says Kristin.

“Absolutely,” I reply and the kung-fu fighter close to my heart gives a little wink, I like to think.  He’s only a wash-off tattoo but still. He reminds me:  I have the power.