Her cups runneth over so she took the girls on tour 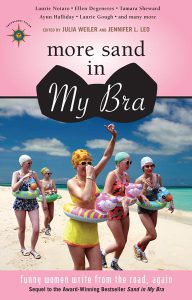 My sister showed up the other day with a new set of breasts. Bouncy breasts. Rounded breasts. Breasts that aim dead ahead with the resolve of a heat-seeking missile.

This is a woman so pathologically modest that she’d sooner be shot than be seen in her flannel, lumberjack-plaid lingerie, much less (no way!) stark naked. And yet here she is: lifting her top so all assembled – her husband, children, sisters, brothers, parents, in-laws and dog – can witness the implant surgeon’s handiwork. Braless, her breasts are mottled black and blue and brazenly shout hurt and pain. My sister beams.

“I don’t mind showing everyone,” she says, “because they aren’t me.”

Her husband Michael, perhaps feeling accused by the silence in the room, puffs for confrontation. “Trust me,” he says, “I had nothing to do with it.”

Acquired on the sly and the shock of us all, Camille’s new B-cup babies – $3500 each – are the last thing on the planet she’d be expected to desire. A tomboy as a child, a teenage athlete, a successful stockbroker and now, a wife and mom, my sister’s sleek, lean shape at its best was not the stuff of bodacious. But it wasn’t uncomely either. And even through two pregnancies, countless diets, and the relentless feminine frustrations with fashion, fitness, her “flaws,” never so much as one discouraging word was heard from her – ever – about her breasts. There was no obvious envy of the generously endowed, no audible lament over the little loss of oomph that comes with the passing years.

Then she came to Paris.

And now here they are: Camille’s new, purchased works of breastly perfection.

So, okay, I say, recalling some startling facts I once read in The Economist. In France, an average $3.1 billion per year is spent on lingerie, more than any other country in Europe. And a full 87 percent of French people believe these snips of silk and whispers of lace are an important – yes, important – part of life. Is it one trip to the land of beauty and the bust, I ask, and you’re sold on the whole French God-is-in-the-thong thing?

“Not at all,” insists my sister, saying, don’t be ridiculous, it has nothing to do with pretty bras and panties and whatnot. “It’s not about the breasts.”

It’s not? Well, it certainly is some bosomly vavavoom my sister now projects. And you’d think it would be eager to (forgive me) bust out around Paris dolled in tighter T-shirts, plungier necklines, tiny cropped tops and bikinis of itsy-bitsy demi-cup tops. Especially since Camille is so tickled by the topic of her no-sweat outpatient procedure that its grotesque and gory details – the less said, the better – are the conversation starter she won’t hesitate to use. With anyone. “It’s just so interesting,” she says, “because come on, it’s not like they’re me!”

But no. Dressed as usual in baggy blouses and camouflage sweaters and shirts that swing unisex, Camille’s new breasts could not be less interested in flaunting their fresh and oh-so-fetching femininity. Apparently, their power is more subtle; their wiles less expected. In fact, my sister’s fuller, firmer new friends are about to change her life. They will take her places she hasn’t been in years, introduce her to adventures she never dared try. Once the incisions heal, the tenderness lessens, and they feel more at home on her chest, Camille’s new breasts will turn her into the kind of traveler I barely dare to be. A woman free. Emboldened. Gutsier, if bustier.

For instance, my sister’s magical new mammaries will inspire her to climb Alaska’s Mt. McKinley, at more than 20,000 feet. They will see her off to Spain for a romantic twenty-sixth anniversary. She will plan a summer sojourn to Sweden, and save for an African photo safari. Here a trip, there a trek, everywhere an airport security check…why, my sister’s intrepid breasts will see to it she henceforth renounces routine and makes her life fun.

What next? I ask, eventually. Will your newly beckoning bust beg you to take-up skydiving? Urge you to join an expedition up Everest? Will it insist you leave Michael and the children to run off with a bronzed, blond hunk of barely 21? “No, nothing like that.” Camille laughs. “They just make me feel good about, you know, me.

“Even though no one will notice and no one can tell,” my sister says of the bosomly facsimiles that, from a respectful distance, have that perky only-her-surgeon-knows-for-sure appearance, “I did it for me. To feel more like…me.”

“But I thought they weren’t you,” I say.

“Right. They aren’t me, but now that they’re around it’s like I’m finally more like, well, Camille.

I muse about this a moment and find I can’t argue with how hanging out with her new pair of perky pals has made my sister not only want to see the world, but also become the best possible 36-B she can be. Yesterday, she dared a Paris hair salon and emerged with a hip choppy bob. Tomorrow it’s off with the children to the Marais, for a class in beginning hip-hop. From a wine-tasting weekend in Bordeaux to a bike ride along some (hilly) miles of the Tour de France route, my sister’s dreams, once delayed, her desires, never tried, are riding a wave of confidence unleashed by the swells that swell her sweaters.

And I am impressed. New power, new pride, and a new self-possession – Camille has it all and a piece or two of newly purchased Parisian pleasure. Oh, I might be a bit jealous of this lingerie that’s oh-so-lusciously French, but am I jealous of her breasts?

Not a chance. French lace or not, my bra is remaining a 34-A, thank you. When I see Camille considering her compelling cleavage with the friendly detachment of an outdoor market monsieur arranging his display of mandarins, firm and flawless, I hug my own imperfect God-givens closer to my heart, live vicariously through my sister’s adventures, and say to anyone who cares to ask (although unlike Camille I will not flash), make mine me.